Take A Hike With ElderTreks 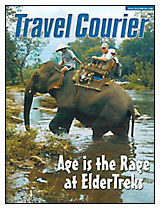 Karl Kannstadter hopes more over-50 vacationers will get out of the motorcoaches that roll comfortably along modern North American and European highways, and onto something a little more exotic - like Peru's Inca Trail, hiking along the Andean walkway to one of the world's most fabled and loftiest archaeological sites.

Kannstadter is a vice-president of operations for Toronto-based ElderTreks, which claims to be the world's first company that caters specifically to travellers aged 50 and over who want a more adventurous vacation than is generally prescribed to someone in their age demographic.

The 11-year-old company sends clients to places virtually anywhere in the world - from Newfoundland and the Queen Charlotte Islands to as far away and remote as Mongolia.

But there's no reason that "mature travelers" shouldn't consider trekking in the Andes or the Himalayas, working their way through mountainous regions lacking many comforts that Canadians take for granted, says Kannstadter. "What surprises a lot of them is they do one of our trips and then realize, I'm capable of doing this."

For example, one recently widowed senior went on an interior Brazil trip, despite having "friends who thought she was insane." The traveller was "out of her comfort zone a few times, but other than that was okay," reports the 36-year-old Kannstadter, who's confident he'll still be enjoying adventure travel in his 60s.

ElderTreks - which grew out of no-longer-existing Toronto-based adventure travel company Passages Exotic Expeditions after company staff noticed many of their clients were elderly - features tours specifically designed for those who have at least half a century behind them.

(The company will take people younger clients but Kannstadter reports over 95 per cent of clients are 50 or over. Those under 50 will be told their fellow explorers will be older than them and travellers are allowed to decide among themselves whether to accept someone under 18 in their group.)

One adjustment made for the comparatively mature clientele is that tours tend to be conducted at a slower pace than those available from companies catering to younger customers. ElderTreks also tries to avoid the one-night stays in order to minimize the amount of packing and unpacking a tour may require. As well, the company tries to find lodging that has private bathrooms, something that people tend to appreciate more acutely as they get older, Kannstadter notes.

ElderTreks recently released a 56-page catalog that offers 36 adventures to more than 40 destinations. Among the itineraries, which span 50 countries on all seven continents, are new tours in Ecuador and China, and a four-country adventure through southern Africa.

All the trips are rated on a scale of one to five for difficulty, with itineraries at the most difficult end featuring the likes of trekking in Patagonia or Nepal, where tour participants might find themselves hiking for up to 10 hours a day. The highest altitude ElderTreks' clients (or ElderTrekkers as they're dubbed) can reach is a Tibetan pass found around 5,520 metres. Travellers are taken there by vehicle. Tibet is also home to the highest point that tour participants will overnight at, with the lodging located around 4,500 m. People heading for the likes of the Central African nation of Mali, in turn, must prepare for temperatures that may hit 40 degrees.

A Turkey itinerary that mostly features relaxing travel by boat and vehicle is at the other end of the difficulty scale. Walking tends to be mostly around tourist sights.

Four-page medical forms must be completed before people can sign up for an ElderTreks trip, with the firm ready to suggest alternate itineraries to those it doesn't believe are physically up to challenging itineraries. The company will turn down those it doesn't believe are prepared for adventure travel. Few people find their trip too grueling, partly because of pre-departure screening and the company's ranking the trips in terms of difficulty.

Would-be ElderTrekkers are also cautioned that things taken for granted at home may not be available elsewhere. For example, Kannstadter says, "If someone asks if cappuccino is available at every stop in Tibet, we tell them, "You won't even get a good cup of regular coffee. You'll have to live without cappuccino for two weeks." Kannstadter says he's convinced Canadian seniors are becoming healthier, adding that his company rarely even sees a smoker these days. And he believes those over 50 are also eating healthier foods and are more inclined to exercise than those in the corresponding age group of earlier generations.

Like many travel companies, ElderTreks saw business decline after the terrorist attacks of Sept. 11, 2001, but Kannstadter says bookings have been rebounding. The company traditionally sees about 1,200 to 1,500 clients a year and numbers have generally been rising.

A key factor is that many mature travellers have often covered much of the world and "a chicken bus [a name given to the often basic buses often found in Central America] and sleeping on a straw mat doesn't appeal to them anymore," Kannstadter says. They tend to have more money they did when younger and want a "clean, comfortable place that doesn't have to be upscale."

To that end, ElderTreks seeks out privately owned and operated lodging. "We'd prefer to stay in a converted Ottoman mansion when we're in Turkey than a Hilton or a Holiday Inn," Kannstadter explains.

Groups have an English-speaking local guide and a Western tour leader and are limited to 16 people in total, prompting Kannstadter to say, "We visit a place rather than invade a place." Led by guides aged 32 to 52, tour groups often end up making unplanned visits to schools or religious ceremonies, with individual members sometimes using sign language to break down communication barriers.

"They're not seeing a destination through a bus window. They're going into a village and meeting locals. They're chatting and trying to communicate as best as they can," Kannstadter says, adding, "We hope that every ElderTreks adventure offers opportunities to learn about the people and history of an area while ensuring that cultural interaction takes place on a mutually respectful, non-exploitive level." He personally has counselled co-travellers not to take pictures of locals "like they're in a zoo" when arriving in a community but first try to establish a bond and then see if locals are willing to be photographed.

ElderTreks says it likes to lend a helping hand in its destinations, many of which are in Third World countries. The tour operator provides financial aid to orphanages in Irian Jaya, Indonesia, Mongolia and Madagascar; donates supplies to schools in Thailand, Pakistan and other countries; and gives money to The International Ecotourism Society and an association of guides belonging to an indigenous Indonesian tribe, helping association members earn a living off tourism. "We want to give back to the communities we go into," Kannstadter says. "I know that sounds trite but we'd like to have them benefit too."

ElderTreks is also committed to improving the health of Canadians, donating a trip for two to Costa Rica as the first prize in the Annual SuperWalk for Parkinson's [disease]. It also sponsors a corporate team in the Heart and Stroke Foundation's annual Ride for the Heart cycling fundraiser in Toronto.