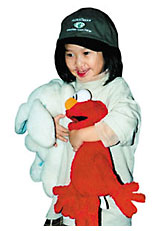 "It's a new smile. Every morning Nhi looks in the mirror and smiles."

That was Dao Tran speaking of the glee now felt by her 3-year old daughter Nhi after surgery corrected her cleft palate. The surgery took place in New Jersey, but the story has its beginning 10,000 miles away in a restaurant in Dalat, Vietnam.

It was during Sam Cassell's birthday dinner on an ElderTreks' Vietnam adventure that Sam and his wife, Carol, met Dao and little Nhi. Sam, a retired MD from Wyckoff, New Jersey, discovered that Nhi had already had two surgeries to correct her cleft palate and that another one was scheduled. Sam's suggestion of possibly having the surgery done in the United States was the beginning of an amazing effort by countless people and organizations.

"The important hurdle was free medical care," remembers Sam. Using his connections, he contacted Dr. Granick, the Director of Plastic Surgery at the Medical College of New Jersey in Newark. Sam presented the case of Nhi to Dr. Granick, who responded by generously agreeing, "Yes, we can do this." On the Vietnamese side, Dao had to secure passports and visas; a complicated and stressful process that took months. Through the combined efforts of Dao, Sam, and Dr. Sharon Hayenga -- a fellow traveler on the Vietnam trip -- and with the help of Senator Mark Dayton of Minnesota and his assistant, Jennifer Erickson, the visa was finally secured. Money was raised using a tax-deductible fund and free air travel from Vietnam to the United States was arranged by Air France, Tzell Corporation and ElderTreks. On September 30, 2002, Dao and Nhi flew to the United States.

On Oct. 17, 2002, Nhi was asked to put on a "pretty green dress" (a hospital gown) and was told that they were going to fix her lip so that she would look like her favorite pop-star. The 4-1/2 hour operation was performed successfully by a five-surgeon team led by Dr. Granick. Her recovery was problem-free and as Sharon stated, "The medical treatment was wonderful. There is no lip disfigurement of any kind. The surgery exceeded our expectations." Possibly the most heart-felt change is that Dao can -- for the first time -- understand her daughter's spoken words. Nhi will require further surgery in 4 or 5 years to close the palate and they are hopeful that they can bring her back to the United States for that procedure. Dao and Nhi flew home on Nov 20, 2002 eager to show their little miracle to their family and friends. Sam added, "On the last night, Dao cooked a Vietnamese feast. It was a banquet!"

When asked about her effort, Sharon defers any credit to Sam and Sam insists the credit goes to Dao. Dao, in turn, gives the credit to everyone else. "This is one of the most gratifying things I have done in my life," affirms Sharon and Sam agrees by saying, "We're still on cloud nine." This is a wonderful story of humble people who have done a spectacular deed. A deed rewarded by a young girl's smile.

Sam Cassell and his wife Carol, Dao Tran and her daughter Nhi