By Gerald Fitzpatrick
FOR MDS OVER 50, ELDERTREKS PROMISES ADVENTURE -- WITH A SAFETY NET 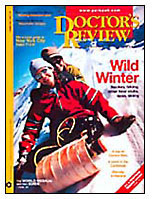 Eldertreks runs active, small-group adventures for travellers over 50. The ElderTreks office in mid-town Toronto is in a cosy old Victorian house where staff will gladly answer questions about any destination and can also refer you to travellers who have been on the trip you're interested in, so that you can get a firsthand account. Their all-inclusive, off-the-beaten-path journeys now cover more than 50 countries and trip prices start from $1795.

Travelling with a small group means you can enjoy the moment.

The words "group travel" can conjure up the cliché of busloads of people wearing name tags and muttering, "If it's Tuesday, this must be Belgium." On the other hand, there's always someone else to do the worrying, whether it's hauling luggage or translating a Turkish menu.

If you're an older traveller, deciding to take a group trip or go it alone often depends on the destination and the type of experience you're looking for. In many countries I'll willingly take off on my own with a set of good maps and let the adventure unfold. But when it comes to places like Vietnam, the Silk Road or West Africa, it's wise to consider a group operator - particularly for a first-time visit. The problem is finding one that's right for you.

If you're looking for luxury travel, the Internet is awash in companies willing to part you from your money. In return, you'll likely be pampered in five-star hotels but may not get an up-close feel for the country. If you want something offbeat, you're already limiting your options. And if you prefer to share the experience with just a few other travellers - not a crowd - the pickings are even slimmer.

"What do you expect in a developing country? If you are not willing to get off the bus and walk, go on a cruise."

That's where ElderTreks has successfully carved out a niche for itself by offering a small-group adventure travel for people 50 and over. "We were the world's first true adventure travel company to offer trips to an older clientele," says Gary Murtagh, president of the Toronto-based company. For the past 15 years, they've run groups of 16 people or less and now travel to over 50 countries.

GET OFF THE BUS

ElderTreks trips are centred on adventure, culture and nature, letting you get up close and personal with the locals. You could be staying with with hill tribes in northern Thailand or camping on the shores of the Niger River in Mali or with Bedouins in the Sahara. During the day you might be riding an elephant or a camel, or travelling by sailboat. Accommodations in the local hotels are comfortable, but rarely five-star, and the food reflects the local culture as much as possible.

The jungles of Vietnam are best visited with a guide.

Most people are attracted to ElderTreks by the small group size. This allows more spontaneity in the schedule, but also means smaller vehicles and a less intrusive effect on the environment. It also means being able to visit local restaurants - and occasionally homes - which is impossible with a 40-passenger bus.

ElderTreks should not be confused with Elderhostel - a US-based non-profit organization involved in life-long learning that takes a more academic approach to travel and usually has much larger groups.

But adventure travel isn't for everyone. Ask Judy Segal of Schaumburg, Illinois. Judy was persuaded to take her first ElerTreks trip by a friend. She loved the sailboat adventure through BC's Queen Charlotte Islands - but her friend didn't. "She was simply the sort of person who would have been much happier on a 1000-person cruise ship." said Judy.

Caroline Hull, a Toronto nurse, has her own take on how to pick a trip. "If you want to see if you've got an adventurous bone in your body." she explains, "start with something like the Galapagos. There's a certain amount of walking and a certain amount of education - and both are part of the ElderTreks experience as far as I'm concerned."

I HAVE TO DO WHAT?

Depending on the destination, adventure travel can also be unpredictable. On a recent trip to Yunnan in China, road conditions were sometimes so bad that people had to walk for kilometre or so while their small bus carefully negotiated gigantic potholes. But everyone enjoyed the chance to stretch their legs. As one repeat ElderTreks traveller said: "What do you expect in a developing country? If you're not willing to get out and help push the bus now and again, may be you should stay home or go on a cruise."

On our trip to Pakistan, ElderTreks donated ceiling fans to a local school.

If you're ready for the unexpected, then you should be ready for adventure travel - and everything that comes with it. On an ElderTreks trip to Laos the toilet arrangements on a small riverboat consisted of squatting over the back of the boat. "We solved that one by insisting that the boat beach on shore when nature called," said Olga Maxwell of Montreal. "Then the men went left and the women went right. No problem."

A company like ElderTreks relies on local suppliers in each country to provide hotels, transportation, coordination and guides. That means ensuring guides are aware of the type of experience ElderTreks wants to give its visitors. In addition to a local guide, a Western representative accompanies almost all ElderTreks groups, except in a few rare cases where the local guide speaks excellent English, has previously conducted a large number of trips for the company and is completely familiar with its program.

Good guides react to unfolding events. On a recent trip to Vietnam, a local guide glimpsed a wedding procession from the bus and asked her group if they wanted to stop and see it. Everyone did and the guide quickly got permission from the family. "Soon we were drinking Tiger beer and bouncing babies on our knees," said Caroline Hull. The group made an impromptu collection for the bride and groom and partied like old friends. "It was one of the highlights of the trip."

Older travellers enjoy an active trip without worrying about keeping up.

HAVE HEART, WILL TRAVEL

And then there are the chance meetings that change lives. On a recent trip to Vietnam, the ElderTreks group encountered Nhi, a three-year-old girl with a cleft palette. A physician in the group, Dr Sam Cassell from New Jersey, wanted to help the little girl and arranged for her to come to the US for corrective surgery. The chief plastic surgeon at the New Jersey College of Medicine performed the operation at no cost and ElderTreks arranged transportation for Nhi and her mother. "It was just something we wanted to help with," said Gary Murtagh. Nhi made a speedy recovery from the operation at Dr Cassell's home late last year and has now returned to Vietnam.

One ElderTreks objective is to facilitate non-exploitive exchanges between their clients and local people. In several parts of the world, such as Irian Jaya, Madagascar, Indonesia and Mongolia, ElderTreks has supported orphanages and homes for children at risk either from lack of local care facilities or political strife. In Madagascar, for example, the local ElderTreks tour leader takes participants to an institution run by Sister Lucy, a French non involved in the care of women and children in need. Assistance takes the direct form of clothing, medicine and school supplies rather than cash to ensure that the help gets to where it's needed.

Occasionally an ElderTreks trip may visit a school where a particular need is identified. This was the case in Pakistan a few years ago where all that was needed to improve the conditions in a rural school were a few ceiling fans. Next time the ElderTreks trip came through, fans were brought to the school and local businessmen matched the gift.

Dogon DancersIn northern Yunnan, we visited a school for the children of families too poor to afford the semester fee required to attend public school in this part of China. Children board at the school, returning home occasionally to help with the harvest. Founded by a dedicated local teacher, the school survives on the on-going support of ElderTreks and other organizations and individuals. Wherever possible ElderTreks itineraries include visits to to these institutions and many participants make their own donations.

Thanks to local guides in Mali, an ElderTreks group sat in on a performance by Dogon dancers.

It's not unusual for ElderTreks travellers to do several trips with the company - and keep coming back for more. Once you've tasted adventure, it's hard to travel any other way.